New night train from Bratislava and Vienna to Split

From 18 June to mid-September, a new night train runs twice a week on the Bratislava – Vienna – Graz – Split route. The line was introduced by the Austrian Federal Railways (ÖBB) in cooperation with the Slovak Railways (ZSSK).

Instead of a long car ride, tourists from Slovakia and Austria can head to the Croatian coast this season in a comfortable and environmentally friendly way with a new night train.

Namely, in cooperation with the Slovak Railways (ZSSK), the Austrian Federal Railways (ÖBB) have introduced a new seasonal line that operates twice a week on the route from Bratislava via Vienna and Graz to Split and back. Passengers can also transfer a car or motorcycle. A seat in a seating car should cost 29.90 euros per person in one direction, while a one-way ticket for a wagon with a bed costs 69.90 euros.

The first EuroNight night train in the direction of Split started operating on 18 June. It departs from the railway station in Bratislava on Tuesdays and Fridays at 15.51 with the expected arrival in Split the next day at 9.50. On Wednesdays and Saturdays, it departs from Split at 4.48 pm, while according to the timetable in Bratislava, it arrives on Thursdays and Sundays at 10.49 am. The new railway line will run until September 11th.

Thanks to the cooperation with the Slovak Railways, the European network of night trains is expanding, which with this new line becomes richer for another holiday destination.

About 200 tourists arrived in a first train

About 200 tourists from Slovakia and Austria arrived in Split on Saturday by train on the Bratislava-Vienna-Split line, and State Secretary at the Ministry of Tourism Tonči Glavina was at the reception at the railway station, emphasizing that expectations for this tourist season are extremely optimistic.

So far, more than 4,000 passenger tickets have been sold for this seasonal railway line in Slovakia and Austria.

State Secretary at the Ministry of Tourism and Sports Tonči Glavina, who welcomed the train at Split railway station, said that expectations for this tourist season were extremely optimistic, saying that it was necessary to continue vaccinating not only workers in the tourism sector but also the population.

He announced that the trend of European Union policies until 2050 will be to use rail transport as one of the most important options for passenger transport.

The President of the Management Board of HŽPP, Željko Ukić, announced that 40 new trains will be procured in the next three years with European Union funds and loans, of which 33 will be electric and seven diesel-electric. He added that the procurement of two electric battery trains is also planned and they will run on local Dalmatian railways.

Ukic also announced that the Budapest-Split seasonal railway line would be established on July 3rd this year.

Older
After the Czechs, the Poles will arrive to the sea by train next summer
Newer
The first train from Budapest to Split arrived on Saturday 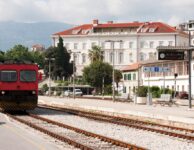 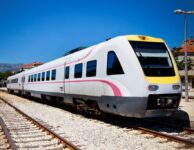